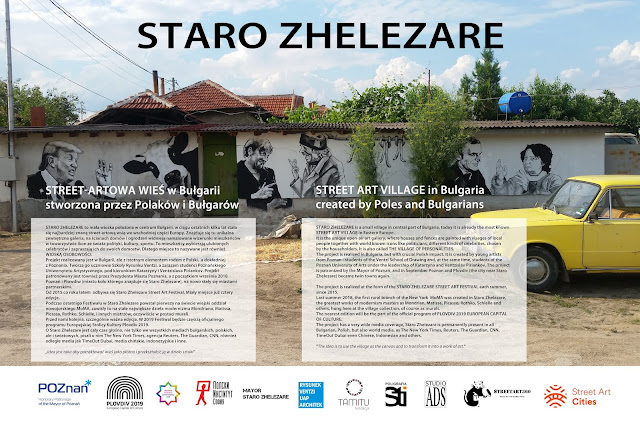 Staro Zhelezare is a small village in central part of Bulgaria, today it is already the most known STREET ART VILLAGE in Eastern Europe.

It is the unique open-air art gallery, where houses and fences are painted with visages of local people together with world known icons like politicians, different kinds of celebrities, chosen by the householders. It is also called THE VILLAGE OF PERSONALITIES.
The project is realized in Bulgaria, but with crucial Polish impact. It is created by young artists from Poznan - students of the Ventzi School of Art and, at the same time, students of the Poznań University of Arts under the leadership of Katarzyna and Ventzislav Piriankov. The project is patronized by PLOVDIV 2019 European Capital of Culture, the Mayor of Poznań, Middlesex University in London, Art on the Streets/Art as Intervention/ Middlesex University, ECHIC – European Consortium for Humanities Institutes and Centres, HERA – Network of Humanities and the Research Area, Polish Institute in Sofia, Architecture Studio ADS Poznan, Foundation TAMITU, Asz Teatr in Poznan, The Institute of Slavic Philology at the University of Adam Mickiewicz in Poznan.
The project is realized at the form of the Staro Zhelezare Street Art Festival each summer, since 2015.
Last summer 2018, the first rural branch of the New York  MoMA was created in Staro Zhelezare, the greatest works of modernism masters as Mondrian, Matisse, Picasso, Rothko, Schielle and others, hung here at the village collection, of course as murals.
The nearest edition will be the part of the official program of PLOVDIV 2019 European Capital of Culture, under the name “Futuristic Utopia and Manifesto of a Beautiful Future”.
The project has a very wide media coverage, Staro Zhelezare is permanently present in all Bulgarian, Polish, but also world media, as The New York Times, Reuters, The Guardian, CNN, TimeOut Dubai, American Press Agency, Chinese CGTN, Arab The National, The Guardian, Le Monde and others.


“The idea is to use the village as our canvas and to transform it into a work of art.” 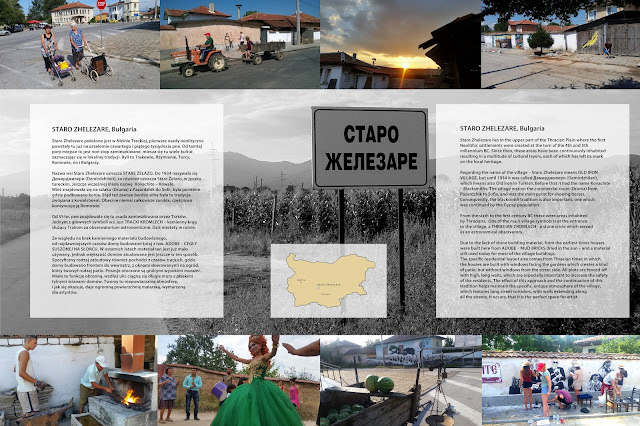 Staro Zhelezare lies in the upper part of the Thracian Plain where the first Neolithic settlements were created at the turn of the 4th and 5th millennium BC. Since then, these areas have been continuously inhabited resulting in a multitude of cultural layers, each of which has left its mark on the local heritage.
Regarding the name of the village – Staro Zhelezare means Old Iron village, but until 1934 it was called Демирджилери (Demirdzhileri), which means also Old Iron in Turkish. Before that it had the name Kovachite – Blacksmiths. The village was on the commercial route (Druma) from Pazardzhik to Sofia, and was the main point for shoeing horses. Consequently, the blacksmith tradition is also important, one which was continued by the Gypsy population.
From the sixth to the first century BC these were areas inhabited by Thracians.  One of the main village symbols is at the entrance to the village, a Thracian cromlech - a stone circle which served as an astronomical observatory.
Due to the lack of stone building material, from the earliest times houses were built here from adobe – mud bricks dried in the sun – and a material still used today for most of the village buildings.


The specific residential layout also comes from Thracian times in which the houses are built with windows facing the gardens which creates a kind of patio, but without windows from the street side. All plots are fenced off with high, long walls, which are especially important to increase the safety of the residents. The effect of this approach and the continuation of this tradition helps maintain the specific, unique atmosphere of the village, which features long street corridors, with walls extending along all the streets. It occurs, that it is the perfect space for artist. 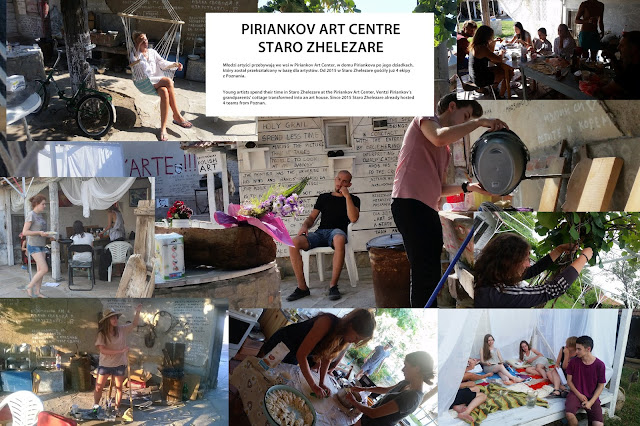 Black and white, Alfred Hitchcock and Princess Diana, Angela Merkel and Bob Marley, The Beatles and Rowan Atkinson’s Mr Bean, Mahatma Gandhi and Donald Trump, Vladimir Putin and Barack Obama, Boyko Borisov and Christo Botev, and many more celebrities cover the walls of Staro Zhelezare. Each of them is coupled with a seemingly ordinary man or woman, dressed in the way local villagers do (T-shirts, plain dresses).

Some of the ordinary people shake hands with the international or national celebrities, share a table or laugh with them, ride carts, tend farm animals.
For the outsider, the effect is a gallery of familiar personalities, depicted in their trademark postures, costumes and moods. For the insider, however, this openair gallery has a second meaning – the faces of the villagers, their smiles and personality traits, are equally recognisable. The graffiti of Staro Zhelezare are simultaneously a representation of people of global and local importance.

These encounters of world-renowned personalities in the company of local heroes typically take the form of amicable meetings for quiet, reflective exchanges of views. What do the subjects communicate to each other? What can be learnt? That we can only possibly guess as it is the element of surprise found in the sight of the collision of distant worlds which opens new areas of reflection. The meeting of separate cultures at the individual level touches upon what we are in fact looking for… authenticity and the essence of our times.


Curiously, a mural on the facade of the local church shows Indira Gandhi and Fidel Castro. This is not accidental - in1968 the village was visited by the Indian prime minister, and in 1972, legendary Fidel Castro also paid a visit to Staro Zhelezare. 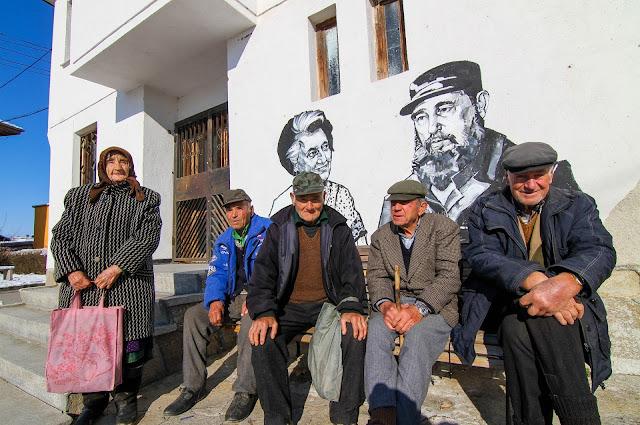 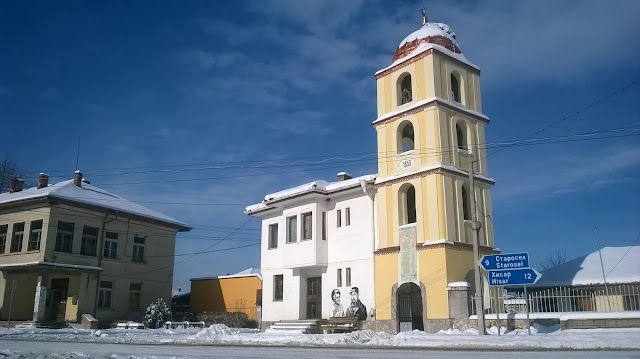 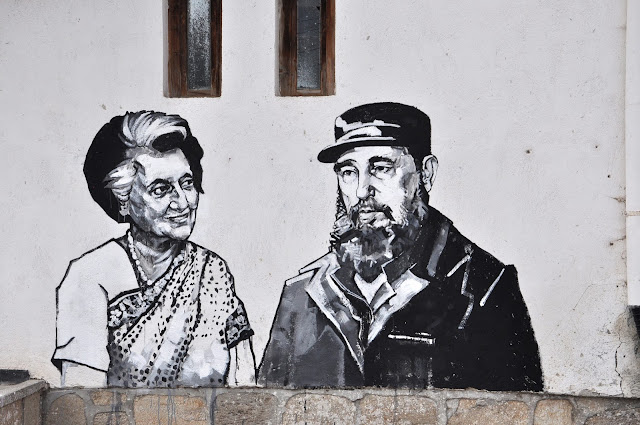 The black-and-white graffiti at Staro Zhelezare are the brainchild of a Bulgarian-Polish artistic couple, KATARZYNA AND VENTSISLAV PIRYANKOV, and his students from Poznan Art University

Ventzi was born in this picturesque region. In the early 90s he spent a year studying in the Art Academy in Sofia before winning a contest and going to the Polish city of Poznan, where he continued his studies. There he created an art school that trains young artists.
The project is created with significant Polish participation.
The festival hosts the most talented students of Piriankovs’ School of Drawing VENTZI, who are also students of the Poznan Art University.
The idea, Mr. Piriankov said, “was to use the village as our canvas and to transform it into a work of art.”
It all started in 2014, when the Piryankovs organised the first Mural Festival called Village of Personalities - Art for Social Change here.
From that time each summer they visit Staro Zhelezare togethet with their Polish students. They spent time in their Piriankov Art Center - Art House transformed from Ventzi’s grandparents’ cottage. 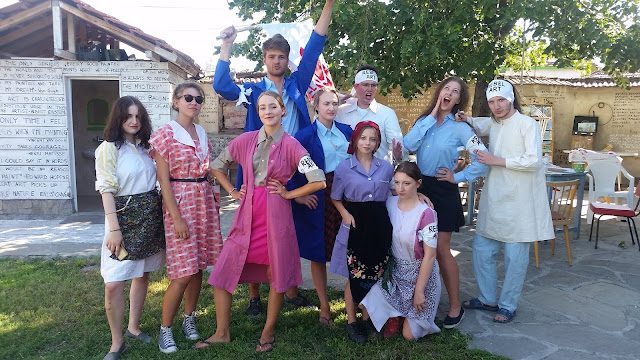 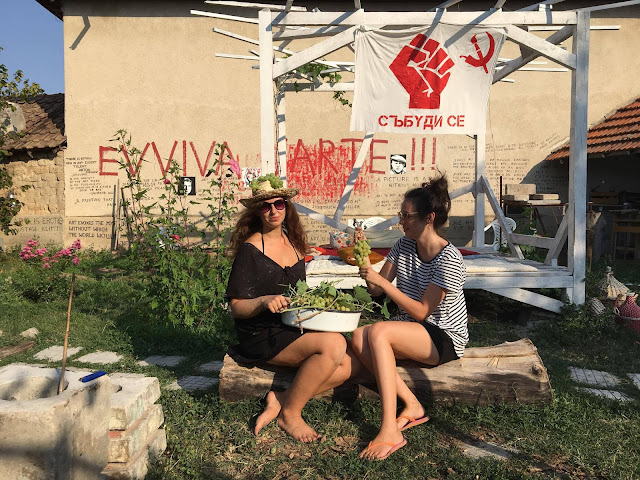 Yanko Mitev, who spends his days wandering the village, who is the big lover of art activity in the village, is painted in the company of Patriarch Cyril of the Bulgarian Orthodox Church known from rescuing the Jews during World War II; Sheikh Mohammed bin Rashid al-Maktoum of Dubai; Boris III, the former czar of Bulgaria; and a generic Orthodox Jew in a black hat and side curls.
Yanko said he dreams of a world where “people live in peace and get along.” 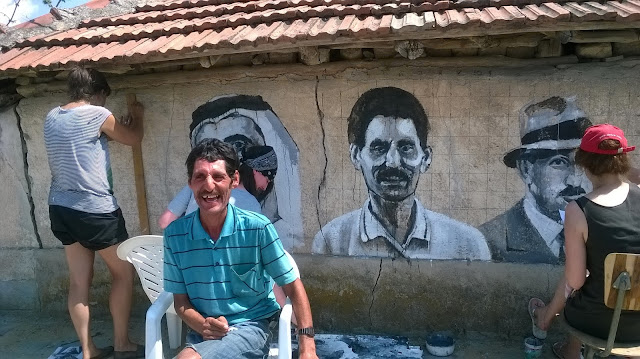 Above this sene are Polish politicians of opposite sides, who can’t stop quarreling even at the company of Pope John Paul II. Selfportraits of Polish artists are painted among them. 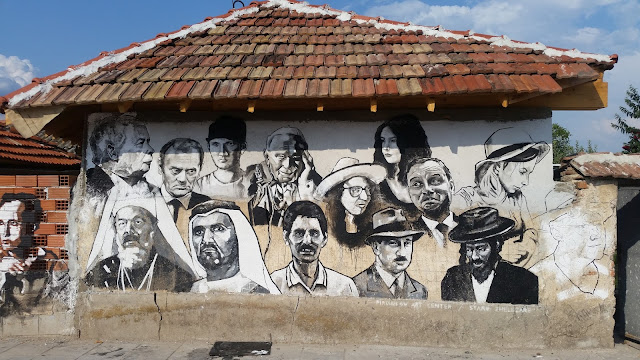 Entering the village you will see the Transformer, painted with figures of local girls, Bulgarian singer Lili Ivanova and Tina Turner. They all welcome people comming to Staro Zhelezare.
Next to it there is a long wall transformed into the Iconostasis of contemporary Artists like Le Corbusier, Joseph Beuys, Andy Warhol, J.M. Basquiat, Mark Rothko, L.M. van der Rohe, Tadeusz Kantor, Franz Kafka and Banksy. There is local girl Sabka, artists Magellan and Guma among them. 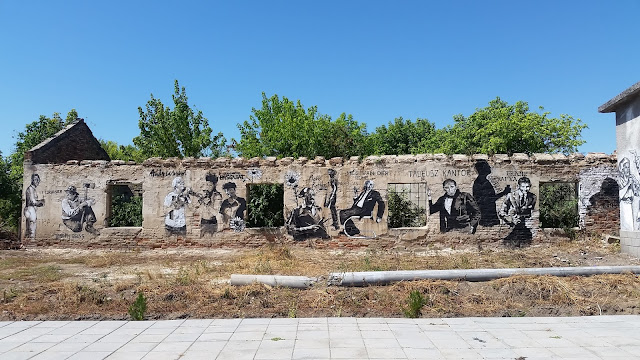 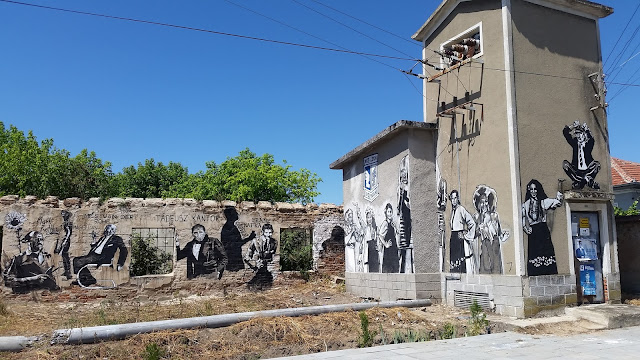 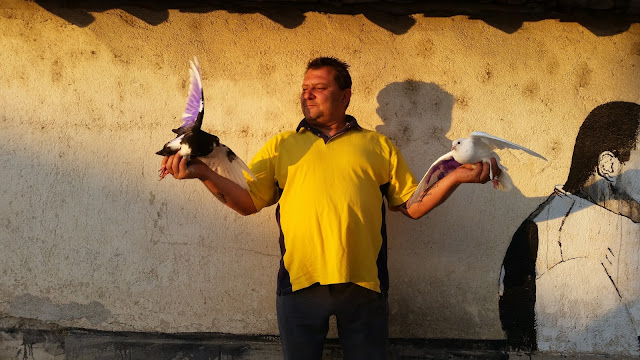 In summer 2017 artists created an ART MANIFESTO, which aims to turn village life into the forefront of avant-garde art. 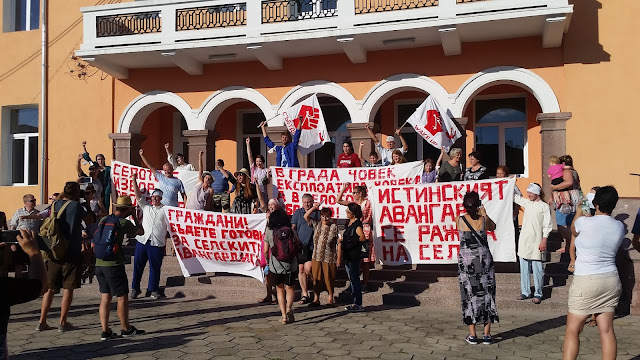 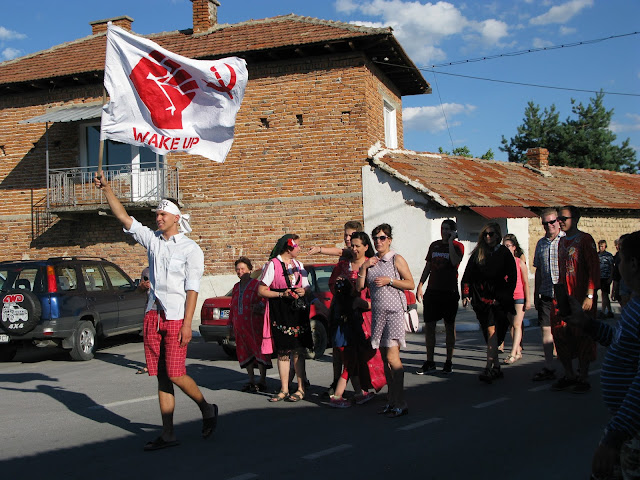 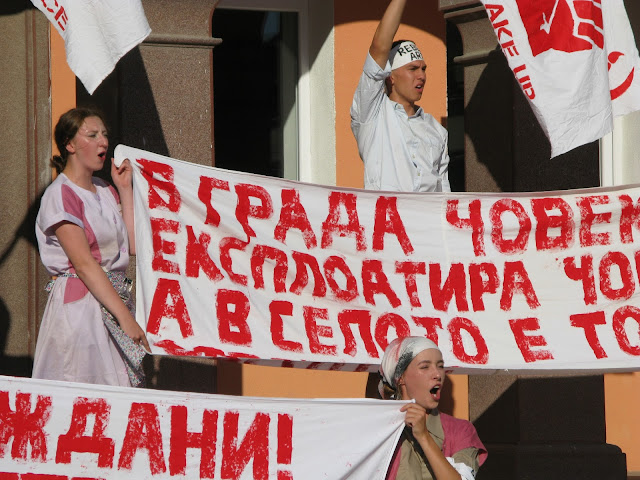 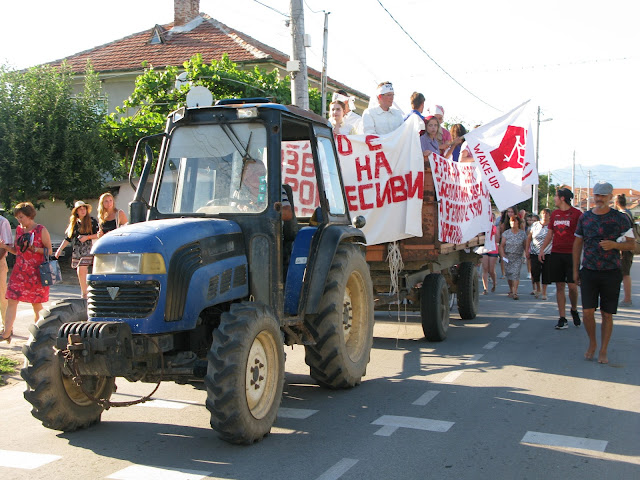 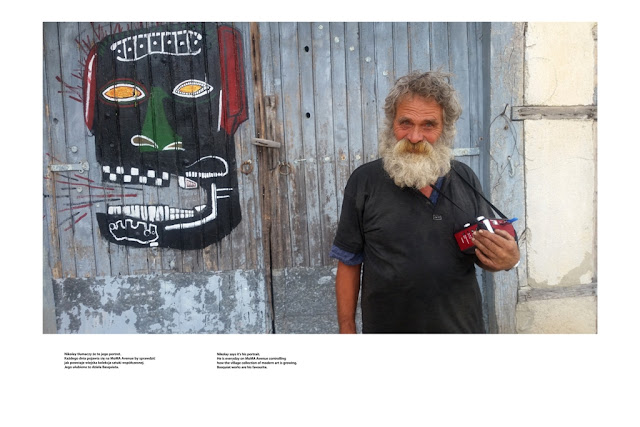 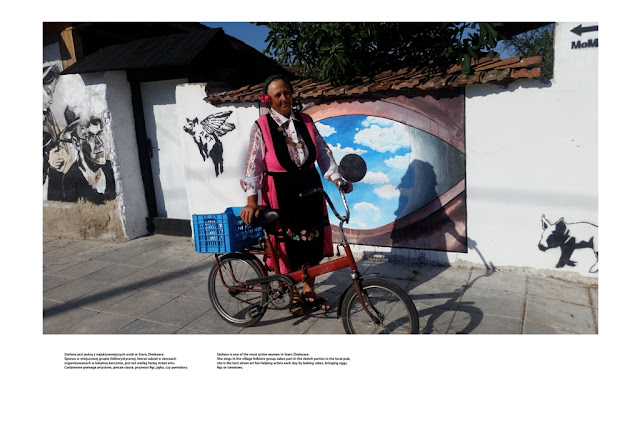 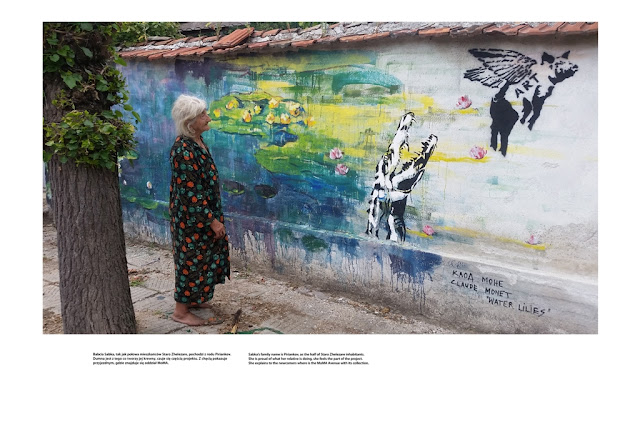 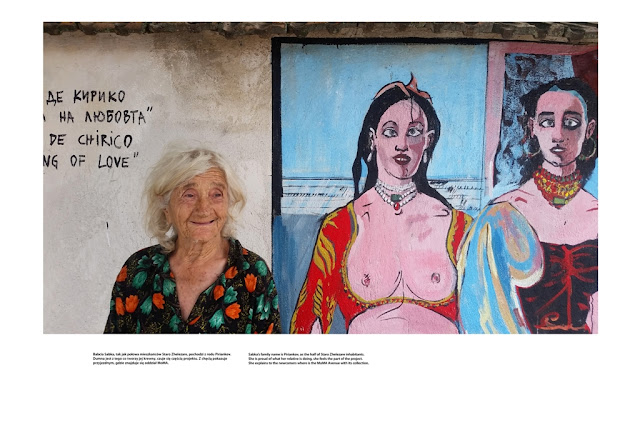 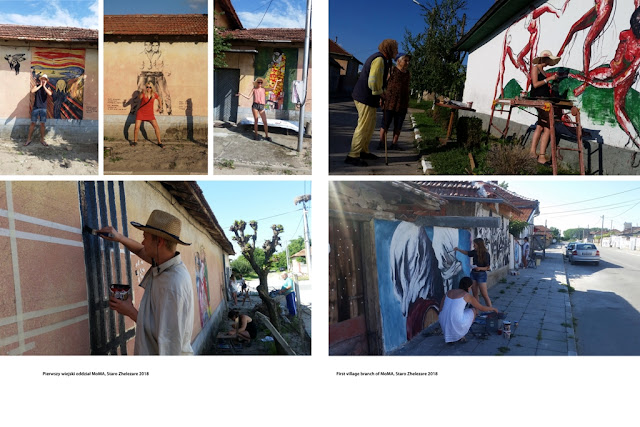 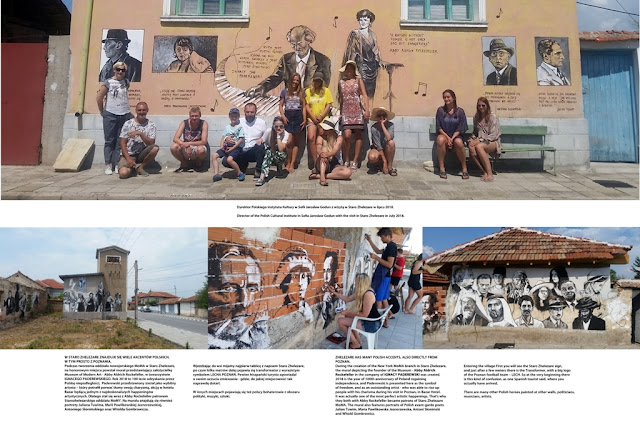 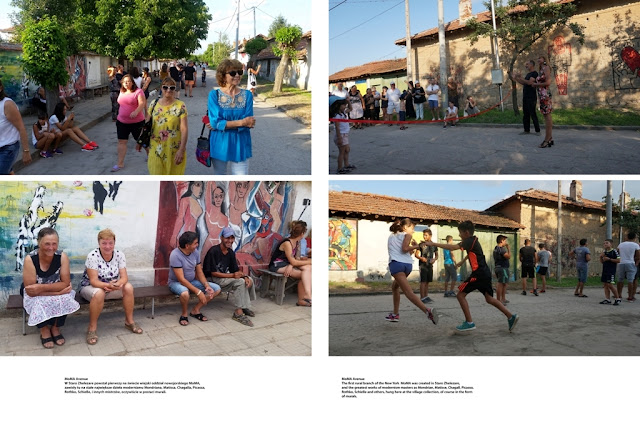 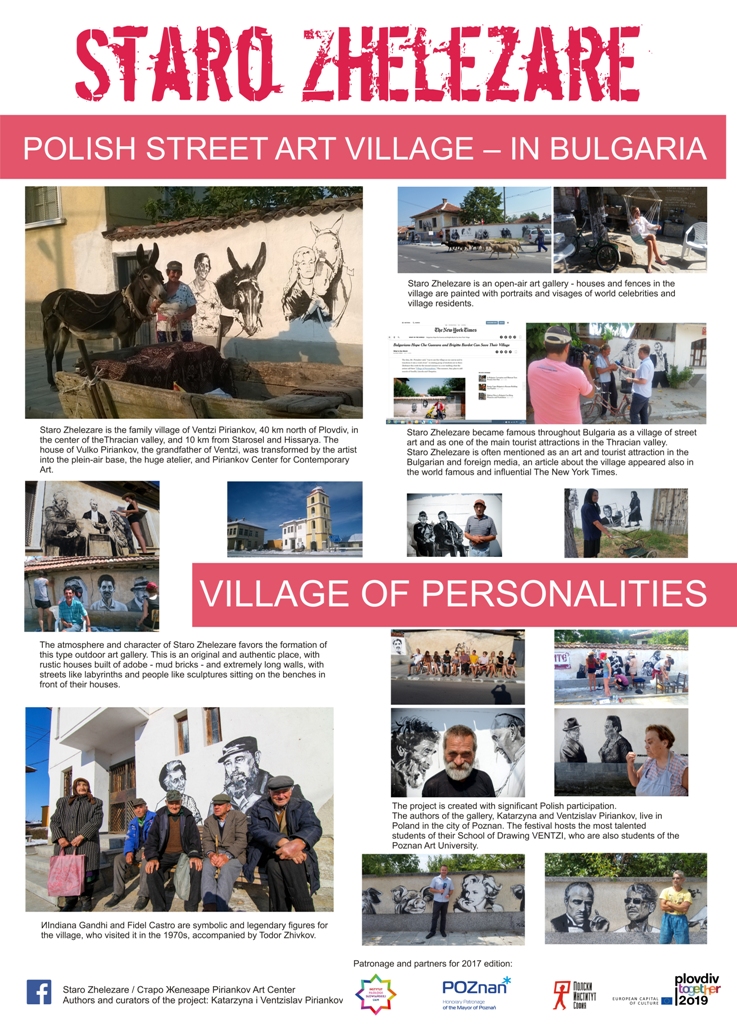 Further information about the festival can be found on our facebook site:
https://www.facebook.com/PiriankovArtCenter/